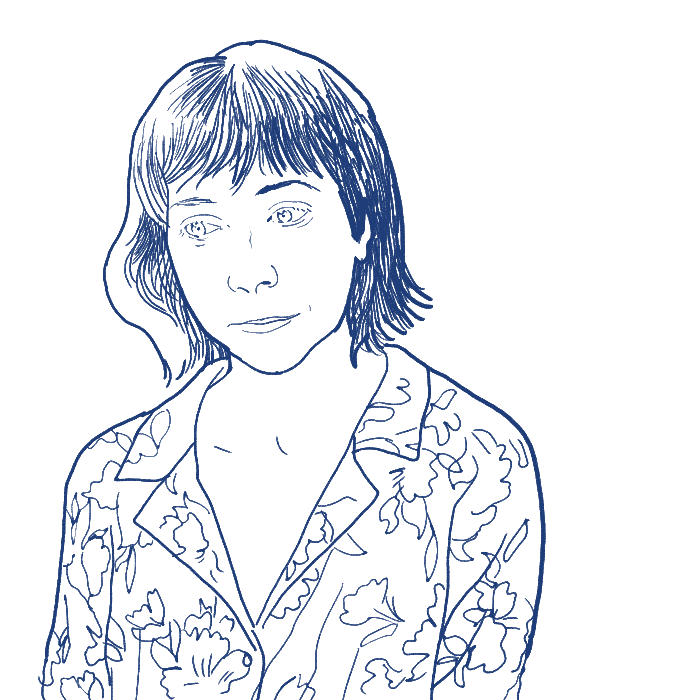 Teresa Silva (Lisbon, 1988) studied at the National Conservatory Dance School, at the Lisbon Polytechnic ’s Higher School of Dance (Degree in Dance) and at the Choreographic Creation, Dance Research and Training Programme at Forum Dança. In 2011, she received a grant from Calouste Gulbenkian Foundation to attend the DanceWEB Scholarship programme, with the mentoring of Boyzie Cekwana and Isabelle Schad. From her training she highlights the workshops with Deborah Hay, Meg Stuart, Vera Mantero, Loïc Touzé, João Fiadeiro, Julien Hamilton, Lisa Nelson, Mark Tompkins, Jonathan Burrows and Jennifer Lacey.

Teresa has been working as an independent choreographer and performer since 2008.

Her creations include the solo Ocooo (2008), with the coaching of Loïc Touzé; A vida enorme/La vie en or co-created (2009) with Maria Lemos; Leva a mão que eu levo o braço (2010) and Um Espanto não se Espera (2011), both created in collaboration with Elizabete Francisca, and both winners of the National Contest Jovens Criadores; Conquest (2011) a solo adaptation of a Deborah Hay choreography, commissioned by Fundação de Serralves; and the co-creations with Filipe Pereira, Letting Nature take over us again (2013), What remains of what has passed (2013) and, more recently, New Creation (2017).

As a performer, she has worked with Marco d’Agostin in Avalanche, Loïc Touzé in Forme Simple, Fanfare and Ô Montagne, David Marques in Ressaca, Rita Natálio in Museu Encantador, Tiago Guedes in Hoje, Luís Guerra in Nevoeiro, Tânia Carvalho in Icosahedron, Ana Borralho & João Galante in World of Interiors, Sofia Dias & Vítor Roriz in O mesmo mas ligeiramente diferente and Mariana Tengner Barros in Peça do Coração, among others.

Since 2012 she has been teaching classes and workshops in a close relationship with her research work. More recently, she co-organizes a group called Dance Classes and Practices, Today, interested in questioning and developing pedagogical practices in the context of contemporary dance and performing arts.

Free Time is based on the book The Life of Plants by Emanuele Coccia. This poetic and philosophical essay begins from the point of view of plants to understand the world not as a simple collection of objects, but as a space of metaphysical mixing where everything interacts with everything and where all living beings share the same breath. Coccia’s description of the relationship of a plant with its environment suggests to me the experience of a body that dances and animates what I understand as dance. Both the plant and the dancer are in constant exposure and communication with the surrounding environment and are both “creators” of the world around them.

This project aims to investigate the relationship between the body and the surrounding space, where both are completely interconnected. I’m interested in understanding how one influences, transforms and defines the other reciproca and continuously. The body becomes space and space becomes body, blurring who is active and who is passive, who moves and who is moved. It’s proposed a place of immersion, permeability, circulation and fluidity of materials and meanings, diluting barriers, in an attempt to approach, and perhaps, even confuse, the dancer, the scenic space and the spectator. Free Time is a possibility to experience our impermanent, interdependent, mobile, porous and shareable nature.